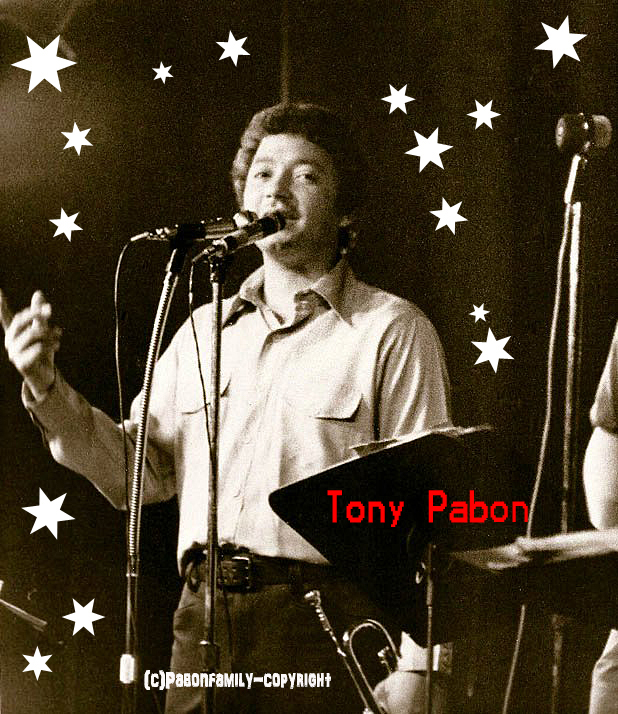 Trumpeter, composer, bandleader, singer, TV host & Latin music distributor Tony Pabón was born in Puerto Rico March 6, 1939 but grew up and spent most of his life in New York City. He began playing with the Pete Rodriguez band in the 1960s. He is often neglected or given credit / recognition for the huge impact he had during the Boogaloo era. He was responsible for writing and co-writing several popular songs during this era such as Michaela, Oh that’s nice, Guagaloo but his most popular track which can still be heard today is, “I like it like that.” I had the privilege of working with Tony during the years of 1972 through 1976.  These were the most amazing years of my life being able to gain much experience and to work with such a great musician, mentor but most importantly a great friend. Sadly Tony left us on 1-21-2014, he is missed dearly.  RIP my dear friend.

Rene Grand’s passion for music began when he was a young boy growing up in Colombia, South America.  His musical inspiration was greatly influenced by Cuban Rhythms and rhythms from other parts of the Caribbean.  He studied Music (Harmony, Orchestration, Arranging Theory and Piano) at the Colegio De Bellas Artes in Colombia, South America from 1952 to 1956.  While studying music, he played with many small groups at places of entertainment within Colombia and Panama.   For over 45 years, he led a very successful musical career as a pianist and in leading his own band “Rene Grand and His Combo New York”.  During these 45 years as a professional musician, he performed at many clubs in New York City.  To mention a few,  Club Tropicoro, Club Caborrojeno, New York Casino, Happy Hills Casino, Brooklyn Casino, Casa Borinquen and many other night clubs and theaters.  He also played alongside many famous orchestras like Sonora Matancera, Charlie Palmieri, El Gran Combo, Tito Puente, Joe Cuba, Primitivo Santos and many others, whom he admired and were an inspiration to him. I met Rene back in 1968, I was contacted by a friend that Rene was looking for a drummer to finish a recording for a song titled (Love Story) for Seeco records and the rest is history. Rene was a mentor, and a father figure and a dear friend, it was an honor and great privilege to have worked so many years with his orchestra, an amazing musician. Rene Grand passed away in New York City on April 21, 2010.  You will always be in our hearts.

Ubaldo Nieto was born in Guayama Puerto Rico and lived in New York City and was considered one of the most renown timbaleros in New York. Uba was highly respected in the music world and was recognized as one of the great performers with Latin American rhythm instruments, he was considered to have an impeccable time on the timbales and was the most outstanding factor when playing with any big band orchestra. Uba has recorded with such greats as Artie Shaw, Mitch Miller, Dizzy Gillespie, Tito Rodrigues, Percy Faith, Art Blakey and the great Machito Orchestra to name a few. I was a musician back in the seventies and was looking to study with a good teacher, I use to play a lot at the Caborrojeno on 145th and the New York Casino on 96th and Broadway. Sometimes Tito Puente would be playing there and the great and late Mike Collazo would let me sit in with the band. I would always ask him if he would give me lessons and he would say no, instead, he use to tell me Ubaldo Nieto is the teacher you need. Sometime during the year 1976 the late Jimmy Sabater called me to sub for him with the Joe Cuba Sextet and during our conversation he also recommended I study with Ubaldo Nieto. In 1976 I called Uba and had the privilege of finally meeting him at his home and he starting giving me lessons, sadly Uba was not in the best of health at the time but I continued to visit him and take lessons every week. He was such a wonderful person I remember paying him for lessons and one day he said to me don’t worry about the money and just come for your lesson. From there on we became very close friends until his death in 1980. I will always remember one important phrase that Uba use to say to me when playing the timbales "RITMO CON BUEN TIEMPO". A fascinating man, teacher, mentor, and friend that I will miss forever. RIP Uba.

Mr. Cohen was nice to grant me permission to use this photo of my teacher back in 1976 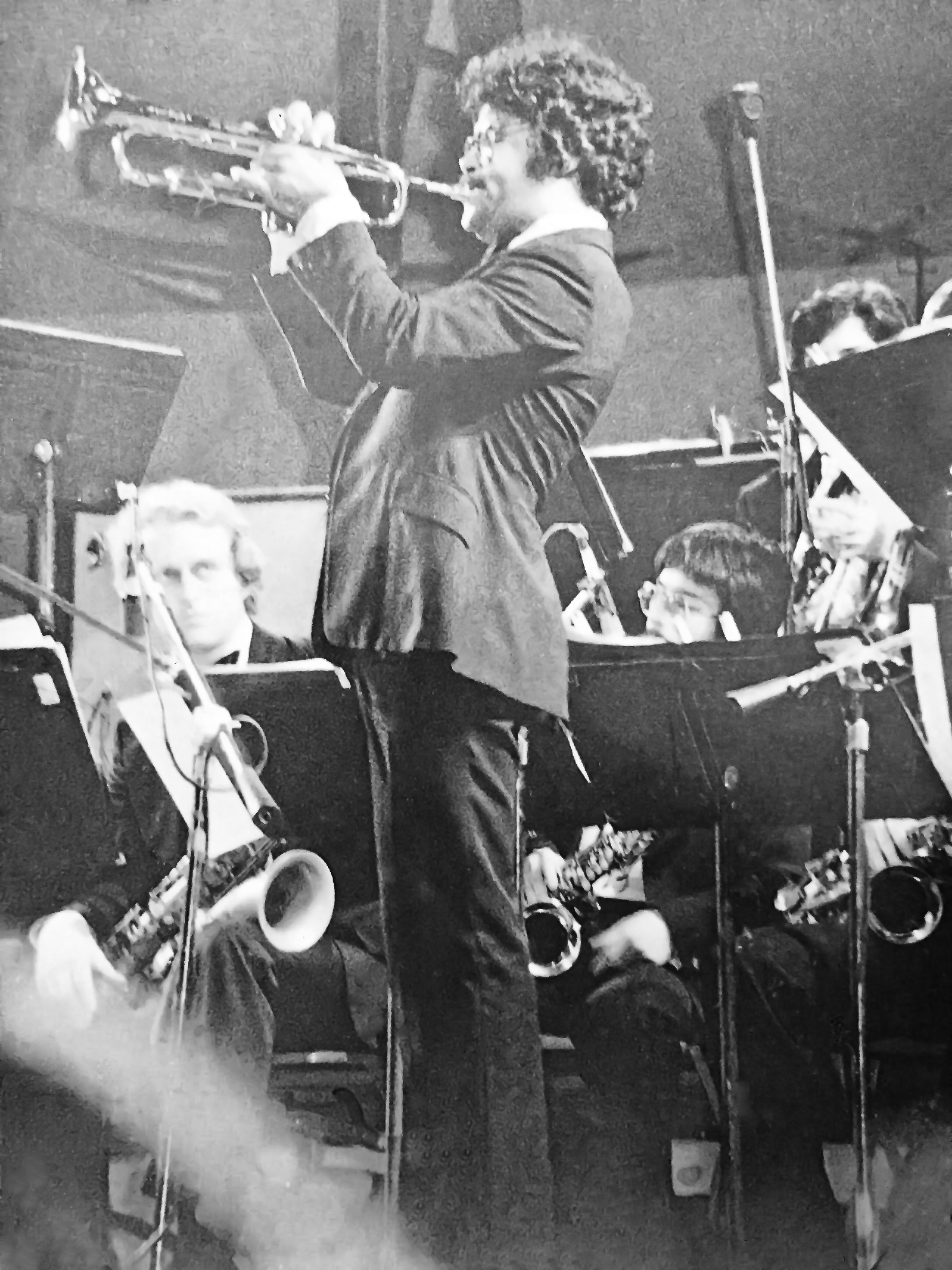 Trumpeter and percussionist Ray Maldonado was born January 20, 1946, in Brooklyn, NY, and raised in a bilingual household. His guitarist father gave him a set of bongos and a full trap kit when Maldonado was five, and a couple of years later Ray became fascinated with the trumpet, becoming proficient enough on the instrument to appear on The Ted Mack Amateur Hour by the time he was 11 years old. He attended the Brooklyn Conservatory of Music and the High School of Performing Arts in New York along with his brother.

Ray Maldonado was in his late teens and he had already recorded professionally with the Alegre All Stars and the La Playa Sextet. In 1967 Maldonado moved to the West Coast to join Mongo Santamaria as a horn man and percussionist, and began his career as a session player and later on would work with Stevie Wonder and Ashford and Simpson, chic, Debbie Harry and many others.

I had the honor of working with Ray back in 1973 during a recording session for Tony Pabon y La Protesta. Tony Pabon was the musical director for Rico Records and recruited Ray to arrange and play horn for his new album (Introducing Nestor Sanchez) RLP 716 for the Rico label which he also composed the tune LOS GATOS. Ray was a perfectionist when it came to playing his instrument he was never satisfied and would alway ask me how was my solo? and I would tell him it was awesome, he would tell the engineer lets do one more take. Ray was one of the most nicest and humble person I ever met in the music business. In 1977 we would again work together with Sociedad 76 orchestra and he played horn on the album - From the Big Apple with Love for Borinquen Records, Sociedad 76, El Hulk de La Salsa for Fania label. I remember I was about 19 years when I did the first recording with Tony Pabon and we were recording a song Carnival en Panama and I didn’t know what rhythm to use on a section of the song and Ray was nice enough to show me what to play.  We had so many great moments and memories we shared working together during those years in the music scene and working in the best clubs in New York City. In 1981 my wife and I were getting married and Ray had just got into town with Stevie Wonder and I asked him if he would play at my wedding and he said yes, I will always treasure that moment. In 1979 while working at the Village Gate with Mongo Santamaria I met Russian producer Boris Midney which recruited me for various studio sessions, he was commissioned by Robert Sigwood to put together an album to promote the movie Empire Strikes Back. Boris needed a horn player that can execute all the solos for this project and right away told Boris Ray Maldonado is your man. I gave Ray a call and explained to him what Boris needed and he told me I will be there in half hour. Ray arrived at Eras recording Studios on 56th St NYC to do the session and while taking his solo on one of the songs we were in the control room and Boris says what an amazing horn player Ray was, Empire Strikes Back was released in 1980 for the RSO label. Sadly Ray left us to young on September 15, 1982 RIP.