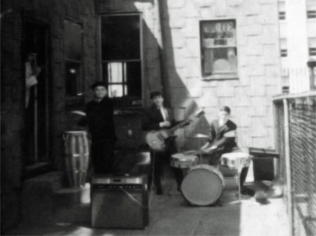 Johnny Santana started playing music at the age of 11.
Johnny Santana’s first drumsticks were kitchen utensils. A young boy in his Brooklyn, New York apartment, he mimicked the beats of 1960s pop-rock icons on the table while his mother cooked. He was hypnotized by the drums watching the Beatles, The Dave Clark Five, and The Rolling Stones with disciplined concentration as he sat two feet away from his TV screen. The Santana’s hailed from Arroyo, Puerto Rico and moved to New York when Johnny was age five. At the age of twelve his father got him his first Gretsch snare drum. His roots and his intrinsic fascination with drumming inspire his life’s work as a Latin percussionist.